First, a correction. I had mentioned yesterday that I would be leaving Sorrento on Sunday…I know my mom has read that and said, “Oh no, there is a problem. I thought Paige spent 3 nights in Sorrento.” So, rest easy…yes I do.
My late afternoon espresso kicked in about the time I laid my head down to go to sleep…that wasn’t happening, but that is when it hit me, I do not leave Sunday, I leave Monday….that gives me another day to enjoy the Amalfi Coast.
As I said, I did not sleep well. Mostly because I was struggling with having to get up and be out the door (down the 85 steps) and to the station by 6:00. On one hand, I wanted to see Amalfi and Positano. Securing a seat on the bus would be most certain at 6:30. On the other hand….I did not want to get up. So when I woke at 5:30 to the sound of thunder, I hopped on the bed and took a look out my skylight.

Problem solved! I left the window open until the pitter patter of rain began to fall. Loving the sound of the (Italian) thunder and allowing myself another hour of rest. 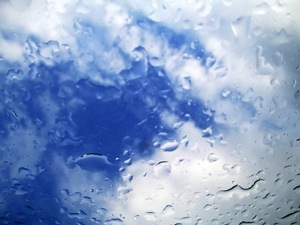 When I started to see blue behind the clouds, I knew it was time to go.

Bottle of water, crema pastry from Rita’s and a window seat. Andiamo!
The early morning light mixed with the cloud cover and the grimy bus windows did not allow for the best of photos, but suffice it to say, anything you have read or seen about the Amalfi Coast is that and then some.
Driving out of town, you notice garden after garden. Some are haphazard, recognizable only to the planter (much like Franco’s). Some are beautifully organized and tended. Perfectly spaced out, straw or nets galore. 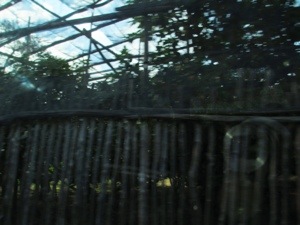 I know this photo is not quality, but the wooden poles created levels or stories in the trees. Each would have nets that could be unrolled. I am assuming this made harvesting/gathering easier. At one point there was a fig tree, a lemon tree, an orange tree and olive trees, and that was in a small plot in the middle of the road. These farmers know how to utilize their space. Like Sandy said regarding Antonito’s pulley system, necessity is the Mamma of invenzione.

Meet my seat mate. When she sat down she said, “Sit by you?” Sure….just don’t sit ON me. On turns she would be in my lap! 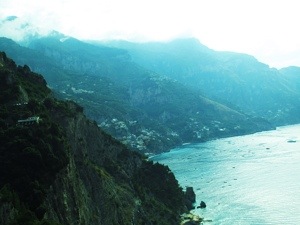 I feel like visiting these beautiful towns in a day is disrespectful. Much like those who say they have been to Capri, if only to hop in hop out. However, a major purpose of this trip was for me to discover places that I would want to return to. A place or two that I would want to spend more than a few weeks. Although the Amalfi Coast is stunning, I feel like movement around this area is difficult.
There are some amazing spots though. Check out the Il San Pietro Hotel in Positano (on google). Romantic or what!! Just be sure your guy likes to lay around, walk a bit (up hill) eat, lay around and eat some more.
Here are some sights of Amalfi.

The Cathedral of Amalfi
Amalfi was one of the four powerful Maritime Republics in the Middle Ages (839-1135 AD). This monumental complex is a testimony to Amalfi’s glorious past. It includes;

The “Cloister of Paradise”.
This is the ancient cemetery for the noblemen of Amalfi, built between 1266 and 1268. 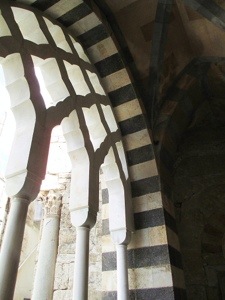 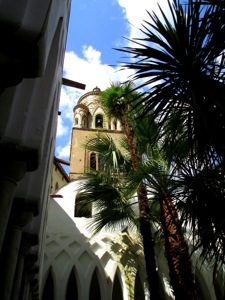 The bell tower (1180-1276) is decorated in the Moorish style with polychrome majolica tiles.
There are also several frescos in small chapels off the Cloister.

Then you enter The Basilica of the Crucifix.

The starkness of this space, the shadow cast by the wooden, suspended crucifix, creates a power focus in this diffused light.

Images of The Holy Spirit are very moving to me. 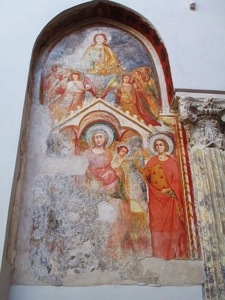 Other pieces in this space (which dates back to 596 AD) include this exquisite fresco,

Relief of Madonna and Child

This Mitre created in 1297 for Ludovico, son of King Charles II and Bishop of Toulouse. It has a background of over 20,000 pearls!

And these small reliquaries. If you look closely, you see areas in the center that hold physical remains of these holy people. 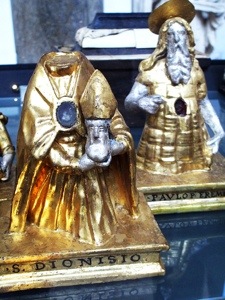 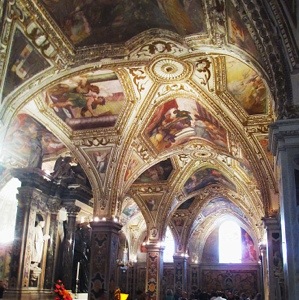 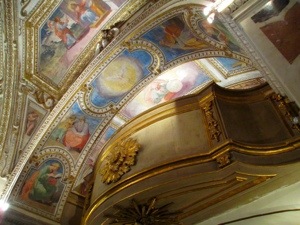 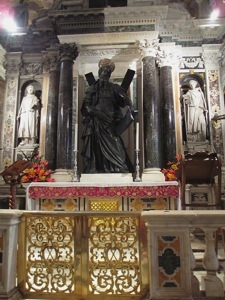 The Crypt is the heart of Amalfi because here are preserved “the head and the other bones” of Saint Andrew, Jesus’ first disciple. The bones reached Amalfi on the 8th of May, 1208.
The large bronze statue is by Florentie artist Michelangelo Naccherino (1604). Naccherino was a student of Michelangelo.
In the Cathedral…

You guessed it, there was a wedding going on. Do you think I am going to hear an organ playing “Here Comes the Bride” and NOT check it out? 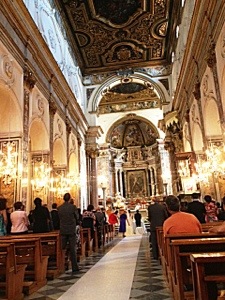 Everywhere you look there are beautiful dedications to Saint Andrew. 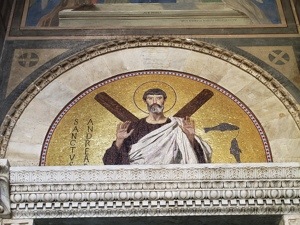 Not exactly sure what this is, but I thought if I do not take a photo of it, I’ll see it somewhere down the line and wish I had. I am sure it has been there for years! 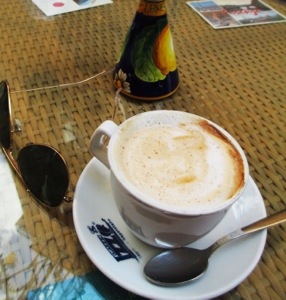 Time for a pick me up…it is still early enough. 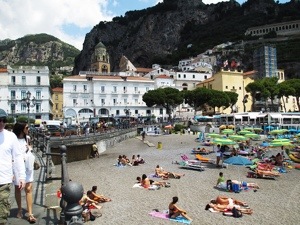 And of course, the spiaggias!

ELVIS is in Italy!! 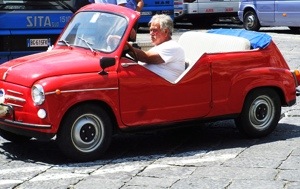 Time to board a bus again and start back.

At one stop, a warm welcome!

I wonder if the band knows?

When we get back to Sorrento, I am starving. I know Emilia’s will be closing shortly so I must look for a pizzeria Rick Steve’s suggests.
I ask a shopkeeper, “Corso Italia e qui?” Si he tells me, I am on the correct street. I am looking for 265. I tell myself I will go a block or two more. And then I see it. 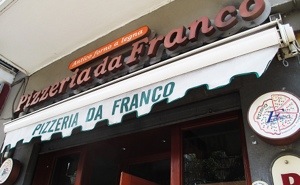 Looks like a happening place. Rick says it is a favorite of locals. I have not really had a pizza yet. I have had a couple of street slices but that’s all. Inside it is quite crowded…Rick Steve’s has quite the following.
I look at the menu and decide on the

Sausage for Dalton and Peppers for Avery.
The pizza arrives

I take my first bite. 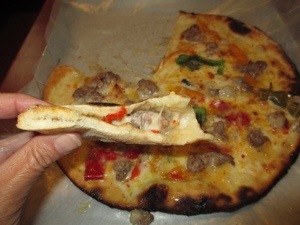 I cannot tell you how happy I was at that moment. It was amazing!! With every bite I am so excited. I am determined to eat the entire thing…should I inhale, should I take small bites? What method will maximize my intake capacity?
I noticed in the kitchen, there was a tile painted with a saint on it. I ask the wild eyed cook, “che è il santo in cucina?” He is hard to understand but I am pretty sure he tells me Santo Antonio. I wonder if he is the saint of fire? I later learn he is the patron saint of Sorrento. Well, kudos to Santo Antonio and his cooks in la cucina.
I notice a family of four is just receiving their pizzas. I watch them expecting to see the ecstasy after their first bites…but no, they don’t even discuss it. They just sit and simply…eat. If my family were here, we would be going on and on….what is wrong with these people. Talk about undeserving. 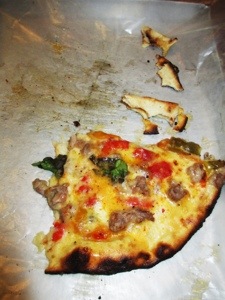 Perhaps if I put more pepper flakes on it…I hear that burns calories…. 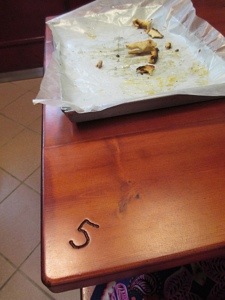 Tavolo cinque, I will remember you fondly!
Before you judge me too harshly, at least I did not order AND eat

The giant Nutella pizza being made as I left…but I still have one more day! 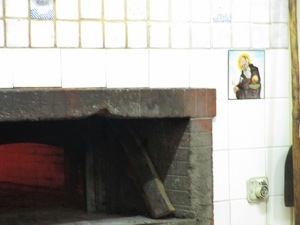 Poor photo quality, but I had to give it up for Santo Antonio! 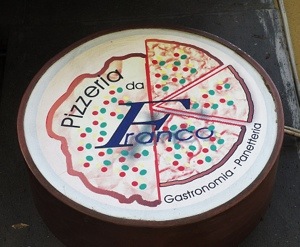 Perfetto!
Now to walk it off a bit. By the way, I do have 85 steps each time I come to my room…that’s got to help a little don’t ya think?

That’s my place at the top!
Although I won’t be eating this evening, I think the lighting at Marina Grande should be nice, so I head that way. 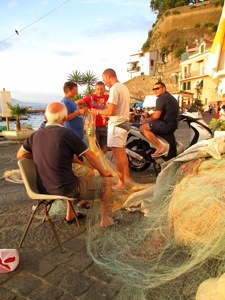 This seemed to be some sort of test. The wads and wads of fishing net, the young ones with their needles, attempting to mend and the elders just seated and laughing. 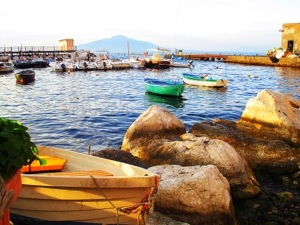 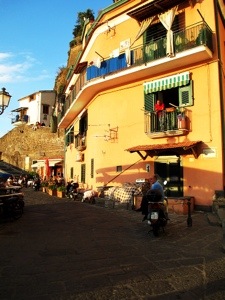 These two were enjoying their evening chat. One from a Vespa, the other from the window. 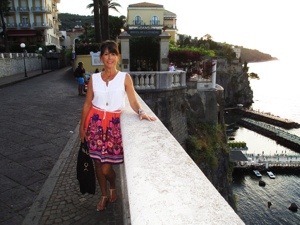 I decide a limoncello and a few minutes people watching in Piazza Tasso can’t hurt. I made some notes on “Holiday Wardrobes” . We’ll cover that on a “slow news day”.
Later I went up to the rooftop, Piazza Tasso below now. 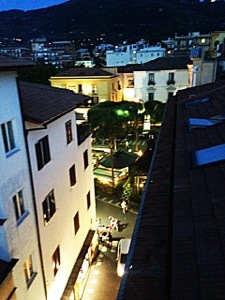 And when it got nice and dark, one more surprise to this day,

Again, this photo does not do the experience justice, but those little lights are the red “Wish Lanterns” being set off from the park where I stood earlier. It was beautiful. I attached my wishes to theirs and watched them vanish into the night sky.
Buonanotte.