As I mentioned yesterday, it is going to be another low key day.
When Danita returns from her run, she says, “OK…I’ve got an adventure for us.”

We throw on our suits and head out the door. Today, we walk all the way through town and through a park. Soon after exiting the park, the terrain changes drastically…hence the “adventure”. 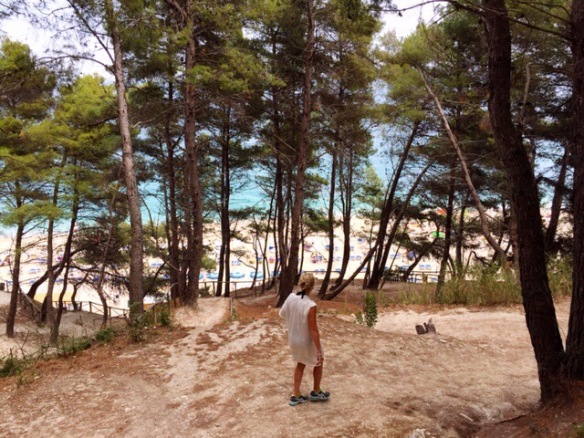 Luckily Danita let me borrow some rubber bottomed flip flops to help me negotiate these steep slopes. She’s wearing her running shoes knowing the importance, having been about 1/2 way down already this morning on her run.

We make it down, down, down and it was worth the haul. This beach is MUCH less crowded, the water is prettier AND… 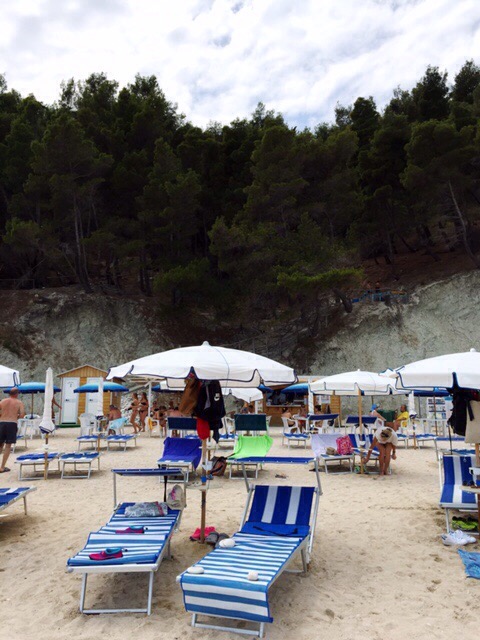 They also have SPRITZ!!

During the walk up, we affirm ourselves because in Danita’s words, “Many could not have made it to the bottom. Most could not make it to the top.”
Yay Us! Gelato per tutti! 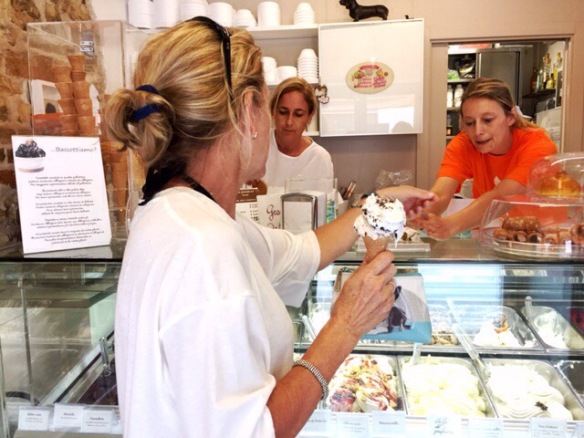 And wait…I spoke too soon regarding our disappointment in the food here…a few blocks ago, I notice a young girl gnawing on a piece of rosemary focaccia…si, ho buoni occhi…and I start sweeping my eyes from side to side as we walk. Vittoria!!!

When I was standing in the middle of the via, getting this shot…a man laughed as he walked by and said, “Arista…” As he rolled his occhi.

Right about now, we realize we have left two bottles of Marche Verdicchios in the freezer back at the villa…Pardon the quality of this photo, but I was laughing so hard trying to capture the moment questioning, “Disperato?” as I poured.

As was already decided, dinner at the villa tonight. We did grab a bit of pizza and also have some burrata left from our first night, a couple of pomodori, a few olives…but there’s an enoteca we’ve seen advertisements for…and being who we are…we wanna go. So we hop in the car, not even cleaning up from la spiaggia and find it. And what a find it was!

Our intention was to go in and get a regional bottle or two, but when we asked about regional wines…our little friend began to pour…

And cut, and slice. We sat and chatted with a local man…picture Pablo Picassoesque, only Italian, not Spanish…while his wife was busy shopping. We were having a difficult time communicating with our little wine guy in the ascot and cool occhiali, so this guy stepped in as if to say, “I’ll interpret…proceed.” Well, that just made the situation funnier and the hour here more enjoyable. We even got Danita to try a regional red…

Which Le piacque!
Every wine they sell here at Enoteca Azzurra is regional. As we were having taste after taste, cheese after cheese and salami after salami, I asked…”Che soon regionali?” “TUTTI soon regionali!” He replied as he showed me his little map.

And by the way, I asked if I could have the map…Nope.

Waiting in line to buy the bottle of our choice, the first taste we had…

“Pablo” asked, “Di dove e?”, “Sono da Texas.”….”AAhhhh! TEXAS!” He exclaims as he nods knowingly pointing at my hat…”Cow-boy-a Hat-a”…No, it is NOT a cowboy hat…although I heard a little Italian kid calling it that as we trekked down to the beach…it’s a fedoraish…lots of people are wearing them, but when they learn we’re from Texas…it’s a cowboy hat.

Back at the villa, we create un altro incredibile board, enjoy our verdicchio

The night is lovely.  La Luna is overhead (thinking of you Avery and Dalton)… Salute un’altra bella Notte in villa. 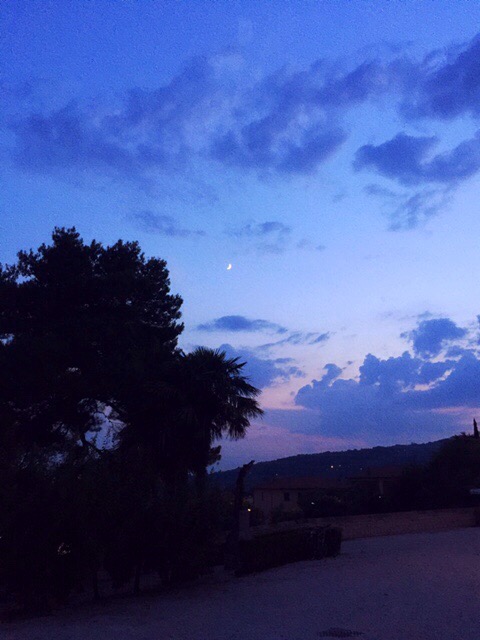