My first night in my appartamento was ok.  I stumped by toe 2x during the night due to the 1″ rise from the hallway to the bathroom and vowed not to do it a 3rd.  The little airconditioner does not get to my home sleeping temperature of 64, but that was to be expected.  I woke up in the morning refreshed and ready to start giorno uno.

My day began at the TIM store.  If you remember, yesterday I spent about 2 hours in the company of Stefania, my personal (ha!) tech assistant but because I could not get the phone to go beyond the spinning “search”, I had to return.  I am not sure what time they opened, but I arrived at about 10, pulled my number and found there had already been 17 people in front of me; 8 or so of whom were still crammed in the small store.  Stefania was once again on duty along with another female phone specialist.  I went in with the attitude that I had nothing else pressing today, so just to be patient.  That sentiment was not shared by numbers 15,16,17 and 21.  It was amazing to me that people would openly fuss and heatedly complain about the amount of time the 2 workers were spending with “clients”.  I just enjoyed it as a form of Italian Theater and it helped the 2 hours go by.

Once Stefania called “diciotto”, I knew I would have her undivided attention for awhile.  Long story short, my old iphone was apparently “locked” even though verizon said it was not.  I considered putting the Italain SIM card in my new iphone, but then imagined getting a verizon bill on top of the amount of the SIM card and quickly decided against that.  I thought the cheapest, easiest way to go was to purchase an unlocked phone here…so I did.  You should have seen the faces and heard the groans of numbers 19-infinity as Stefania patiently showed me how to ramp up my new phone.  Now “all” my Italian amici can contact me AND I can google map a destination (even though once it shows me the location, it shuts down…oh well) out on the streets without fear of having a $1,000 phone bill when I return home.

When I went back to my appartamento to ditch the iphone and the new phone box, I researched a spot for lunch and headed Oltrarno (on the other side of the Arno).

A blog I frequent “Girl in Florence” (another Texas Tuscan) suggested Chicco di Caffe for a great lunch, budget friendly and loved by locals.

This primi plate and a bicchiere di vino bianco locale was a great recommendation.

After lunch, I searched out the studio of the street sign artist Clet Abraham.  Last year I got a kick out of his clever sense of humor and roamed the streets looking for the many different manipulations of municipal signage.  Since then, I somehow stumbled across who the artist was and that he had a studio in Ortrarno.  On the way, I saw several new works by Clet.

When I arrived I was disappointed that the studio was closed.  I stood there peering through the glass door hoping someone might be in and have pity on me.  No such luck.  I roamed a bit around the immediate area and decided to stop into an osteria have perhaps the studio would be open afterwards.

Osteria San Niccolo was a great choice for dolce and conversation.

Here I enjoyed one of the best Tiramisu I have ever had.  The zabaione was light as air.  After a short bit, a young couple walked in and told the waiter, “We’ll have what she is having.”  He was from Syria and she from Egypt.  Of course both spoke perfect english (damn us monolingual Americans!)  We enjoyed a lively conversation about the riches of traveling and experiencing different cultures.  They got a kick out of my “Eat Pray Eat” agenda. 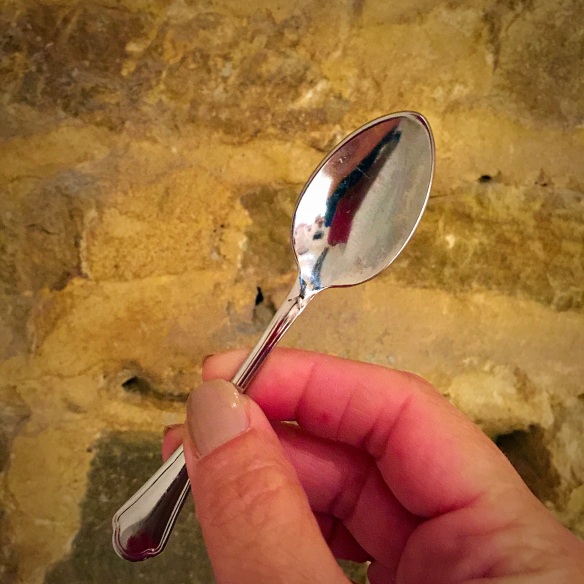 We parted ways and to my delight, the Clet studio was open!  What a coincidence I thought it was that the girl working in the studio was also just at Chicco di Caffe…she did not.  As I was choosing a few items to buy, I asked her if I could take a couple of photographs.  “Of what?” she said looking around  with attitude.  She agreed.  I took a few quick shots before she changed her mind.

So cool to see an artist’s workspace! 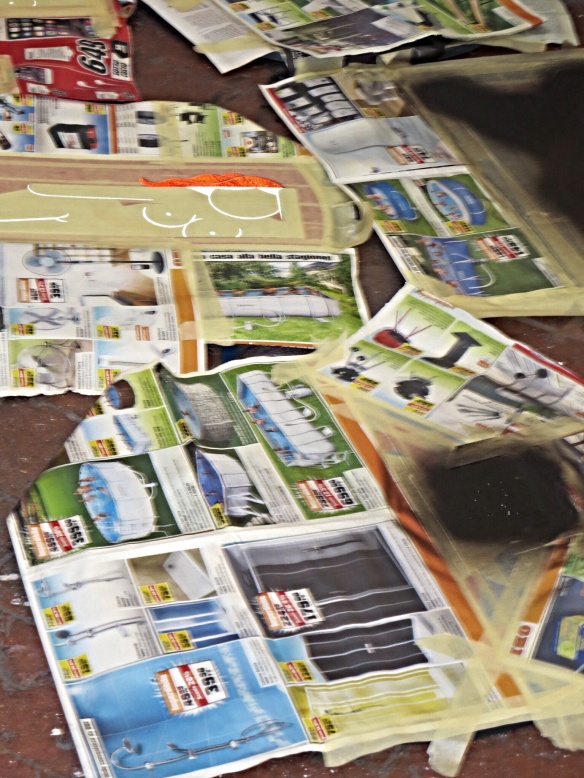 I know this last one is a little blurry, but I feared she might lose patience with me at any moment.  I love the simplicity of stencil work.

After leaving Oltrarno, I just roamed noticing more and more street art that most simply are oblivious to.  There is a new guy out there, goes by the name “Blub”, creating a new street art series.  After researching the signature, I learned he is a mystery.  He has yet to reveal himself to the public.  He takes iconic works of art and iconic people and puts a diving mask on them. Way quirky, but I’m a fan.  He has a Instagram @lartesanuotare.  My eyes are peeled to see how many divers I can find on the streets of Firenze.

My first to see. Botticelli’s cherub.

Even the ermine has a mask!

As often happens with street art, someone has added a mustache to Dante.

Other works seen along the way… 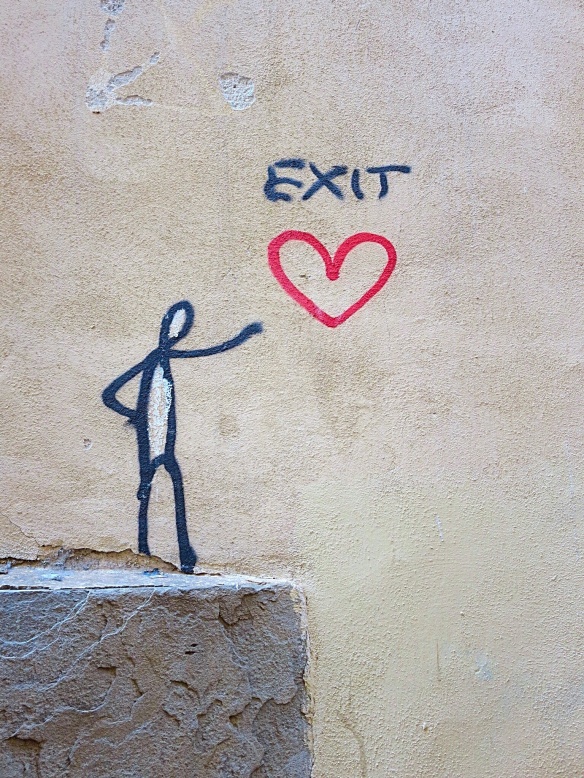 This one is a great example (I censored) of building on the “work” of someone else.  I laughed out loud.  Clever, clever!

Mom and Dad told me about this place.  It is fairly new.  They just celebrated their 1 year anniversary.  It is an open air food court of sorts.  Located above the traditional Mercato San Lorenzo, it is a foodie’s paradise.  You can graze from stall to stall enjoying pane, carni, pasta e dolci.  Of course there is also a bar area in the middle serving espresso, spritz and wine.  This is a wonderful place to get out of the heat for a bit, reconnect with free wifi and relax.

Roaming about, I passed this street artist several times through out the day documenting his process and sharing my spare change. 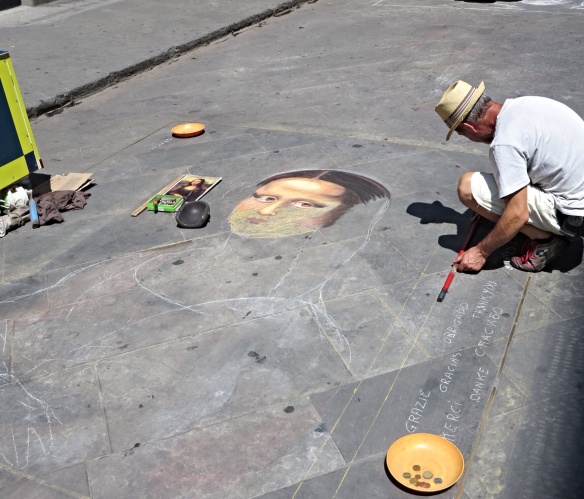 At last it was time to meet Elisa.  To catch you up on my Italian Amica, I knew for this trip I wanted to add to my “language experience”.  I had searched and searched for a unique, one on one approach.  The only thing I was finding were traditional language schools that offered 1 hour lessons to weeks of classes.  Then I found The Florentine.  This is a bi-weekly newspaper printed in english covering italian news, events and culture.  They also have a classified section.  At first I was very excited to find this.  There were several people offering their services to tutor.  Then I thought it was a little “craig’s listy” and probably not a wise idea.  My third thought was “what the heck” so I contacted 2 females.  Both responded.  The first said she was interested but did I speak italian so that when she is explaining the history and culture I would understand…nope…that’s the point of this.  The second was Elisa.  She shared her interest in learning what I had in mind.  I foolishly responded back asking about her experience with the Italian language.  She said she had lived in Florence all her life and her parents were Florentine as well.  Check language and city culture/history off my “interview” questions.

Elisa and I continued to design our program.  She was so generous with her time and ideas.  We “met” through Skype to nail down our plan.  A plan which now included accompanying her and her familia to their sea home, cooking with her mom and great aunt, going with her sister to a friend’s agriturismo for more cooking and eating, exploring the markets, cooking and sightseeing with her friend Paola and spending a day (again cooking and eating) with another of Elisa’s friends, Costanza, at her country home.  Ya might say I hit the jackpot!

Well tonight that adventure began.  I was to meet Elisa atLa Prosciutteria for an aperitivo.

Although I was fairly comfortable finding the spot (it is on the same street as yesterday’s panino), I headed over a bit early.  When the people inside on the right left, I snagged that prime spot and waited.

A few minutes later, a woman I knew was not Elisa seemed to be looking for someone.  We glanced at each other a couple of times and then she asked, “Paige?”  Si, si!  It was Paola.  This is Elisa’s amica that I will be spending time with later in the week.  What fun this was going to be.

Shortly after Paola, Elisa arrived.  We chatted and joked like old friends.  They were kind to my attempts at their bella lingua as we shared wonderful food, drinks and stories.

Afterwards, Elisa recommended a new gelateria by the duomo.  We grabbed her bike from a nearby rack and walked over.

The line attested to Gelateria Edoardo’s reputation.  Who can complain waiting in the shadows of the duomo?  Not I.

Both Elisa and I chose cioccolato e zabaione on a wonderfully crisp, fresh cono.  On our passeggiata through the still crowded,  cobblestone streets, Elisa ran into a couple she knew.  The woman had been her english teacher while in middle school.  It was heartwarming to see their greeting and listen to their lively conversation.  I joined in and immediately knew these were people you could talk with for hours.  I know Elisa, Paola and others will continue to make this trip a once in a lifetime adventure and a  sweet, sweet memory!