I’m sitting in my appartamento in Firenze, pretty much worn out from the last 30 hours or so…but I am going to jump in, filling you in a bit on what has gone on thus far. I feel if I don’t jump in…I’ll get behind and lost.

Earlier in the week, I decided to call United and Swiss Air just to double check my reservations. Good thing I did. Monday night I was told by Swiss Air United had cancelled my flight and had yet to reinstate one. Four hours later, almost 3 of which were spent on hold listening to the garbled United jingle, I was given a new flight, no longer going through Zurich but routed through Frankfurt instead. I had lost my good aisle seats I had chosen in January and was relegated to the back of the plane in a middle seat…But at least I had a flight right?

I made it through the remainder of the week at school, crossing my fingers that everything was going to work out.
And it did. I arrived at the Austin Airport with plenty of time to have a chat with United. Cal was my hero of the day, reinstating my earlier seat choices for free and giving me a $100 travel voucher with United. I would have rather the incident never happened, but at least he seemed like he cared. I asked him what I could do so see that this never happened to me again and he said that when you make reservations that far in advance, you need to check them every once in awhile because schedules change.

The flight to Chicago went off without a hitch, but when we landed, I noticed I had only 15 minutes to get to another terminal and to my gate.  The flight attendant warned me not to stop at the restroom.  She advised me to take the shuttle and hustle.  I arrived in the shuttle line to be told the shuttle could only take 23 and I was the 25.  So I Amazing Raced it through 3 terminals at O’hare and arrived at the terminal before the shuttle.  No time to grab a snack, not restroom break, but I was there.

Walking through the first class “lounge” area really makes you feel like a peasant when you reach your section.  I don’t think I’ve ever seen such a nice set up.  As I was walking up to my aisle seat…the one I had originally reserved, then lost, then paid extra for, then was reimbursed for, I noticed a woman looking at me.  The man in the row in front of her was turned around discussing something with her.  Before I even arrived, I knew what they had in mind.  In a heavy Russian accent she said, “You mind if husband sit here and you sit there?”  Before she could even get it out, I said, “No I am sorry.  I paid extra for the isle.”  They continued to “discuss” me in Russian, but I stood (or sat) firm.

Before we took off, the chipper captain kept telling us what a short flight we were going to have, less than 8 hours.  And he was right, we even arrived in Frankfurt 45 minutes early.

Once we arrived in Frankfurt, I located my new gate then enjoyed my first European pastry and cappucino while I practiced my Italian on my phone.

Not sure how handy this sentence is going to be…but I got it correct. 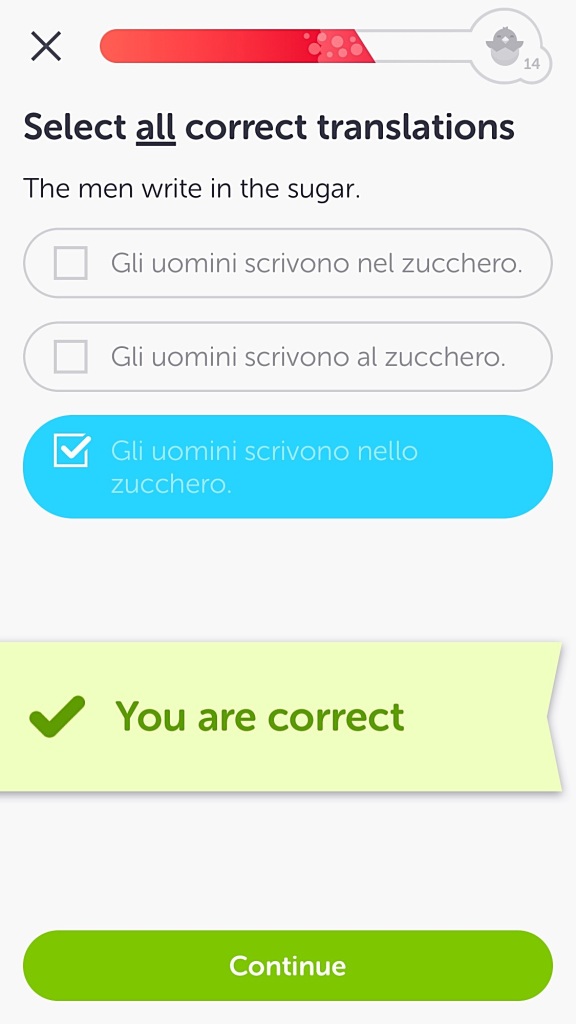 The flight from Frankfurt to Firenze was a short, beautiful one.  I do not know if I have ever flown over the Alps before but this time I will never forget.  From a distance out, I wasn’t sure what I was looking at.  Tufts of clouds in the sky seemed to be dipping below the horizon creating what looked to be a mirror effect.  Then I realized there were snowcapped mountains in the mix.  Lakes fingered through the valleys creating a confusing sense of size and of time.  Thin veils of misty clouds drifted above blue lakes.  Two ridges were split by a beautiful green valley, a river snaking through it.  I looked at these craggy, rugged mountains contrasting with the small villages nestled between.  What must life be like there?  How do you even get to the villages?  How much must a red bell pepper be? 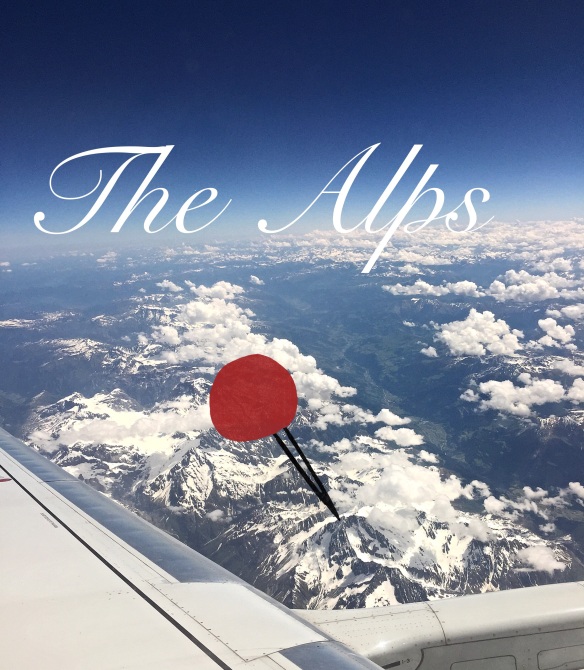 The mountains soon gave way to lush green hills, spotted with terracotta roofs and cypress trees.  Toscana, just like in the movies.I was excited the moment my foot touched the Italian Terra of the airport runway, but disappointed when no one checked and or stamped my passport.  We were just all allowed in.

Your heart cannot help but race when you are waiting for your luggage, especially when some of the same pieces make their 2nd lap.  So I was relieved to see the Ferrari coming around the carousel.  As I waited, I watched a brief video welcoming visitors to Firenze pointing out the choices one had to get to the city center.  I chose the cheepest of the 4, autobus/6 euro.

As I exited the terminal, the smell of cigarette smoke wafted under my nose. Finding it oddly welcoming, I smile and know I am in Italia!

As the autobus pulls out of the airport, I am greeted by a Fernando Botero sculpture, “Paloma”. 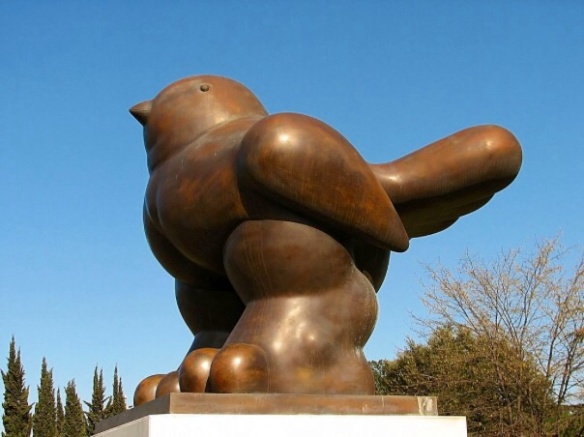 Is it not the cutest thing.  I have always loved Botero’s (Fernando Botero,1932-   , Columbian, Modern Art) style.  I still regret not buying a copy of his chubby Mona Lisa from a sidewalk vendor in Central Park years ago.

As the bus moved into the Historic City Center of Firenze, it seemed like just yesterday I was here.  The bus let us off at Santa Maria Novella Station, I walked confidently in the direction of the Arno knowing my appartamento was close to Ponte Vecchio.  I found the street and the correct number pretty easily, but that is when I hit a wall.  The door did not have the name of the appartamento on it, only the little buzzer with 6 or so names.  I turned the data on on my phone just for a moment to try to make a call, but it did not go through.  So I quickly turned it back off  and considered my options.  2 young girls had walked by twice obviously looking for their hotel as well.  When they buzzed into the one directly across from mine, I asked if I could tag along and possibly have their hotel call Tomaso at mine.  They said sure, but the guy at their hotel said he “could not help”.  I was tempted to help him define the difference between could not and would not…but I simply slipped back out to the street.

By the way, I have some VERY classy neighbors!  The Salvatore Ferragamo Museo that I enjoyed so much during my last visit is catty corner to my place.  Via de Tornabuoni is like the Rodeo Drive of Firenze.

Anyway back to my saga…I decide to buzz a couple of the buttons at #20.  Nothing.  I peek into a trattoria next door and give a guy my “lost and confused” face.  Carlo clicks his heels on over and says “Si Signora?”.  I hand him my reservation papers, try to explain my issue and he says, “Well, let us call them.” About 20 minutes later Tomaso appears to let me in.  Grazie mille Carlo!  I’ll tip him well when I have a glass of wine there later this week.

Tomaso and his heavy scent of tobacco let me into the appartamento and he shares the highlights with me.  Very cute, great size, glamorous location and fairly budget friendly. 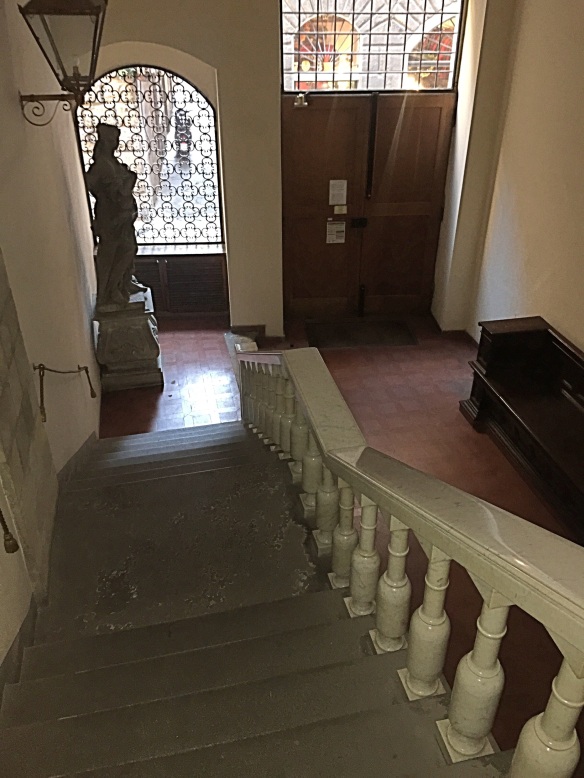 My entrance once through the beautiful, heavy wooden doors. 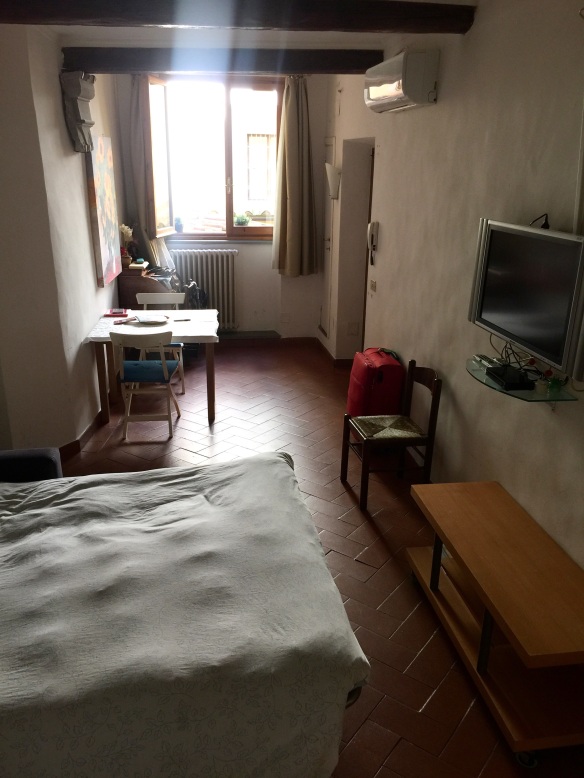 The room from the kitchen.

My view from my open finestra della cucina.

There is a nice bath, lots of storage space (drawers and closets) and even a washing machine. Good things can be found when you plan REALLY early.

After I unpacked, I needed un morso a mangiare.  Blaine had asked me what my first meal would be.  At the top of my list was a return visit to my favorite panino shop.

And this time, I was fairly comfortable telling the guys what I wanted on my panino- prosciutto, pomodori, basilico, mozzarella, olio d’oliva e balsamico.  Meraviglioso! 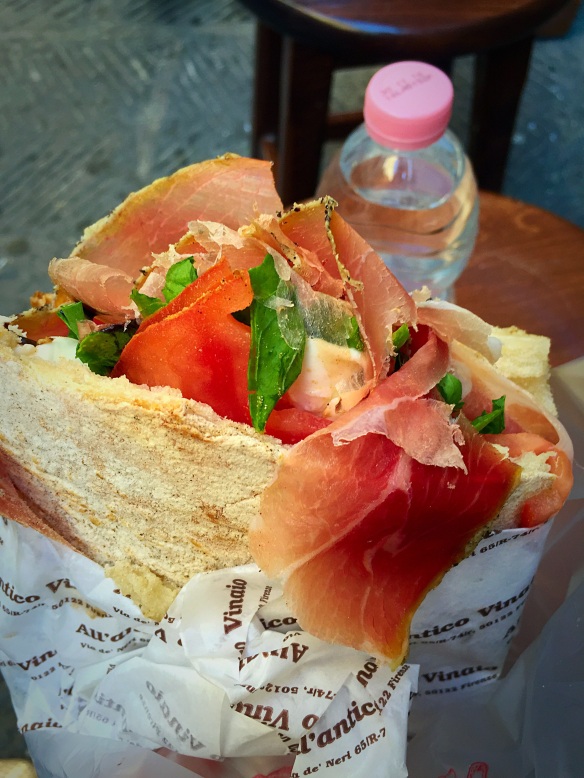 It’s bigger than my open hand and it’s ONLY 5 euro!!!  I walked through the streets noshing and wiping my mouth…no body knows me here.

As I headed to the TIM phone store, several works of street art caught my eye.  This one I’ve already seen several versions of.

And these spoons are each at least 5 feet tall. 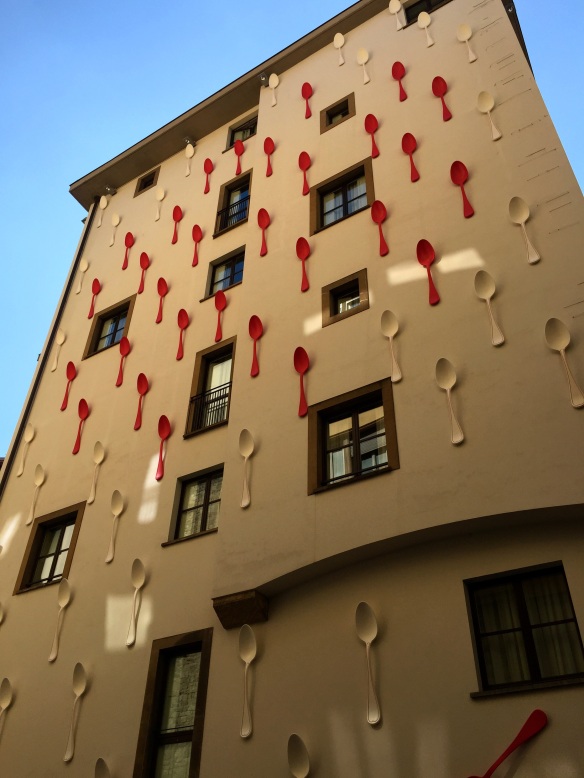 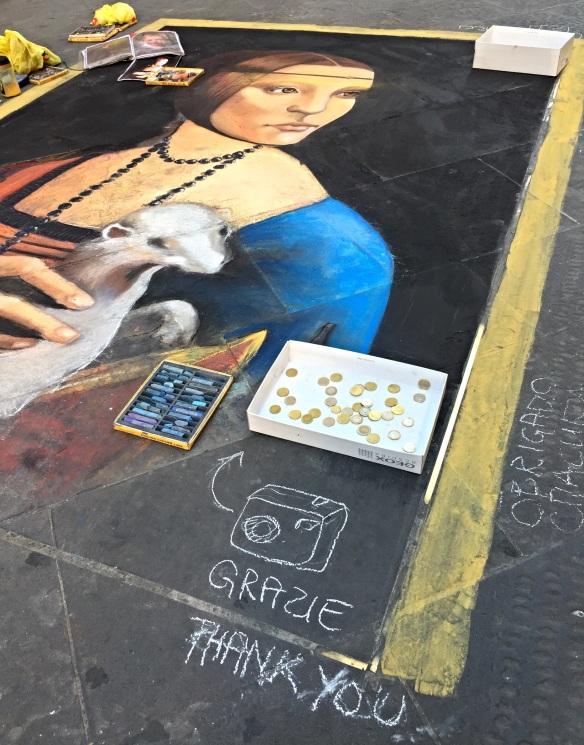 da Vinci’s “Lady with an Ermine”

I am trying something new this trip.  I brought my old iphone and had the TIM people put in an Italian SIM card.  I waited in line at least an hour.  Like our phone stores, they do a booming business.  I will need to go back tomorrow.  I foolishly brought it to them without any battery life.  The woman was very helpful, but now that it is up and running, I do not understand the directions and numbers she gave me.  The great part about this is that I paid cash, so when my minutes are used, they’re used.  I do not get charged for going over.  I’ll let you know if it works out for me.  I only plan to use it to call my hotels (would have come in handy to contact Tomas earlier) and search places and maps when I am away from wifi.

Next I roamed around deliriously in circles looking for a small grocery.

When I was trying to ask the owner of a bookstore, he could not understand me.  Then I told him my list, “acqua, zucchero, latte” and he understood me.  I’m making progress!  The one I finally found was quite a ways from my appartamento, so I lugged back my goods including 6 1.5 liters of acqua and called it a day when I got back.

Tomorrow I’ll talk with Elisa to see what she has planned for me/us this week.