Hotel Margherita is the largest hotel I have stayed in thus far. 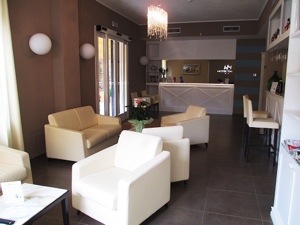 It is sleek and modern with 31 rooms. I actually feel as though I have “sold out”. I feel that my money is benefiting a company and not a family, as my other stays have. But as overall budget comes into play, their rate was considerably better than our old hotel right across the “street”.
Hotel Margherita offers a huge breakfast buffet in the mornings complete with local baked goods (so…I am benefiting Laura and her famiglia right?). The only drawback of the generous breakfast is the 6 in one “cafe” machine…kinda feel like I am at Jek’s. 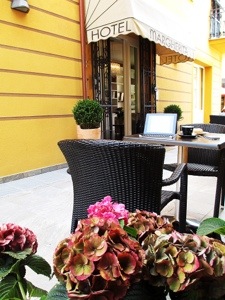 My new “office”….here at Hotel Margherita, the wifi works indoors and out….wooohoooo!

Directly behind my office. 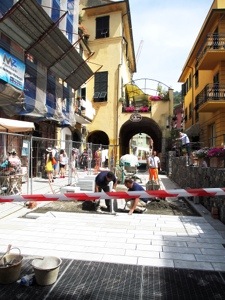 The street to the right of my office.

October of 2011, 2 of the 5 villages were devastated by a flood. Many, many business in Monterosso and virtually all in Vernazza were destroyed. After a busy, tiring summer tourist season, the locals had to survive, assess and rebuild. If you were not aware of this tragedy, you would not even notice. However, you would likely be annoyed at the construction going on around you during your holiday. Knowing helps us to appreciate and understand. Eduardo, who seems to be the hotel manager, stands out on the terrace frustrated with the Italian governments timing. He stands shaking his head wondering aloud (but under his breath) why this road rebuilding could not have waited until October. “It is July, ” he says “and this town relies on the tourist. But with the Italian government, if-a you-a complain….there can be more trouble. So…it eeesa best to just watch.” “Still-a…I do not-a understand-a. Eeeat-a is July!” I assure him, this kind of government timing is everywhere.

After breakfast, I decide to go on a hike to the neighboring town, Vernazza.

Since I have been here, this man has not left his perch.

The trailhead begins past the hotel nestled on the side of the mountain.

Renting one of these…floating fun…looks like a fab idea. Blaine and Dalton can peddle, while Avery and I slide and sun….somehow I think it would work a bit differently… 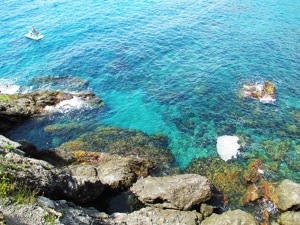 But alas….this trail (and many others) are closed for maintenance. Supposedly this one will reopen Friday.

So I regroup as I walk.

This little restaurant, Il Casello, is a family favorite. I learned last night from a guy wearing a UT shirt that the owner of one of the restaurants up on this cliff, has a home in Austin. I figure I need to check it out. And yes indeed, Bacco does live in Austin in the winters. He has married an American and his children go to school there. They live in Steiner Ranch. He says the activities for the children are much better and very organized. He also mentions that the houses are much bigger, “If it rains for a few days, the kids-a can stay inside.” Things we do not think about. I tell him goodbye promising during my stay I will come to eat, a couple of times.
It was funny, as I was talking with him, an American man came up to pay. The bill was 20 something and he only had 100. Bacco did not have change so he asked the man if he could come back and pay later. Nice. 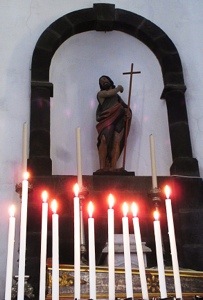 I think this photograph of the statue of Saint Theresa would make a beautiful prayer card.

I decide to begin a longer hike up through the mountains. I have no intention of doing the full 4 hour hike, but I begin…but first a bit of nourishment. Anchovies or acciughe are a seafood staple around here. I give a stuffed one a try. 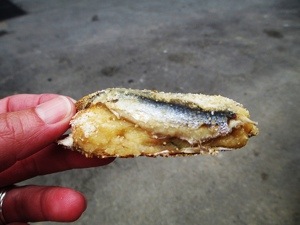 Very good.
I see people walking around with little folded cones full of these fried…I will try that before I leave.
My walk begins going all the way up Via Roma, which is the street my hotel is on.
Although I cannot say I “enjoyed” the entirely uphill trek, I consider that it balances out some of my food intake.

At the beginning of the trail, I noticed a few boxes of necessities. I wondered how that poor person will get their purchases up to their place. A few moments later, this guy comes down with his little, loud machine….that’s how…a tiny, little flatbed. People LIVE like this.

As you can tell the day was a bit cloudy. It is funny how the locals apologize for it. I welcome the cool, damp air.
During my “hike” there is a woman about 40 yards ahead of me. Every once and a while, she stops, panting and resting as I am. I am sure my presence is pushing her on a bit…like I am, she is trying to save face. About an hour into the hike and nowhere near a point of leveling out…here she comes starting back down. “No more?” I ask. She says that her kids are at the beach but this seemed more enjoyable to her. “Nice views but it is a bit heavy, no?” She says she has a ferry to catch. I walk on another 20 minutes or so then think…maybe I should catch a ferry as well.
I go back to the room, shower, change and nap (my 2nd of the trip). I think since the coastal trail is to open on Friday, what have I got to prove?
After my nap, I decide I am ready for another train ride. The trains between the 5 towns run frequently and cost less than two euro.
Eduardo recommends a bar in Riomaggiore that has the best aperitivo in the 5 towns. He says it is on top of a “how you say-a….rock-a” and has an amazing view. Sounds good to me.
Riomaggiore it is!

A mural at Riomaggiore station depicting life in the Cinque Terre.
Eduardo had told me the bar was to the right of the train station up some steps. Before I go there, I take a left into the historic city center. 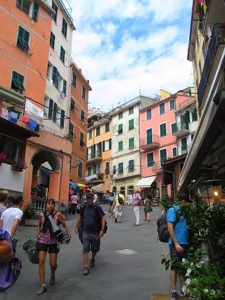 Instead of more pane, I choose a fritto di gamberi e calamari cone. 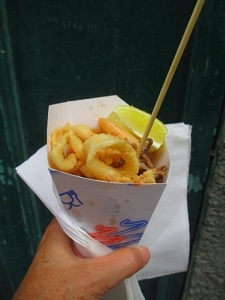 The calamari was the best and obviously freshest I have ever had…I make “cone” the theme of my evening.

This little eggplant guy cracks me up.
When I enter the stand to buy some cherries (in a cone), the owner says the eggplant “ees-a his-a friend-a”.

Although Via dell’ Amore is closed, I walk to the gates. 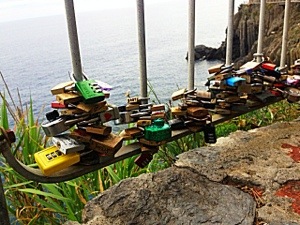 Via dell’ Amore was named after young lovers from different villages would meet here. The trail was created in the 1920’s after the 2nd train line came. Before that, villagers rarely married outside their own. The trail was established as a meeting point for boys and girls from the neighboring towns. A journalist coined the pathway’s now established name, Pathway of Love.
And while I visited….a young couple was having their wedding portraits done. 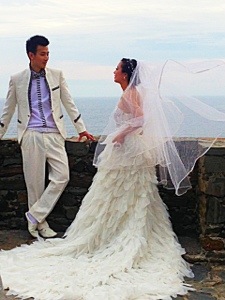 These are my no doubt, much cheaper version!!
Finally I reach the bar Eduardo had suggested, Bar and Vini, a pie’ de Ma’. And what a wonderful recommendation it was! 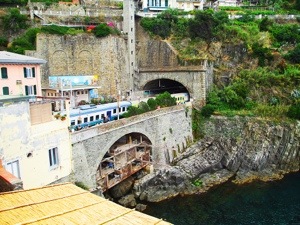 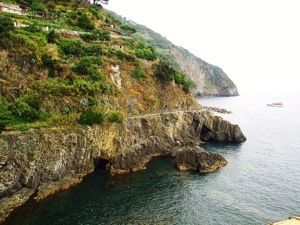 There it is out on the rock, as seen from the train station.
After my wine, I walk down to the marina. 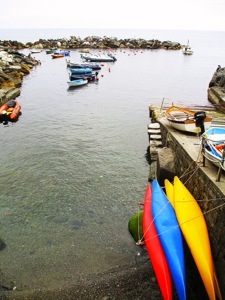 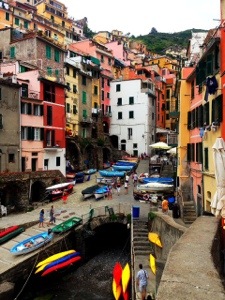 I return home to Monterosso for dessert and then it is off to bed.