Si I am aware I have written my title twice. Last night I was writing on the terrace here in Anacapri and the mosquitos set in. I went inside to finish up and walking that 20 steps lost my internet connection. And I guess a draft was not automatically saved. Avanti!

Sunday morning began at the Roma Termini. This should look familiar to most of my famiglia. Mom, Dalton, Avery and I spent a few hours huddled here on our last trip. This morning, no problems. I arrived extra early to be comfortable. And to be honest, I never tire of people watching.
The train to Napoli arrived and departed right on schedule. I was a bit apprehensive about Napoli. It has a reputation of being Italy at its grittiest. Rick Steve’s says if you love the chaos of Rome, go further South, if not….don’t.
I remember our brief stop here with the kids. We all huddled together like penguins trying to stay warm. When movement was necessary, we would psych ourselves up and move in a clump. Well, having no one to clump with. I exited the train and simulated a clump(ish). There were 2 young girls walking with confidence toward the exit so I just tagged along, grabbed a taxi outside (ignoring the many offers inside), told my driver with authority (yea right) “Molo Beverello per favore”. Franco, the owner of the small guest house I will be staying at in Capri had alerted me to what the fare to the port should be. When my driver tried more and opened his glove compartment so I could not see the meter, I was poised and ready with pen and paper in hand already having written the cab number on it. This was also a tip from Franco. Supposedly if the taxis in Napoli get a complaint, they are off the streets for five days. Worked like a charm. We settled on 12 euros…Franco’s suggested amount.

I purchased my ferry ticket to Capri, hopped on board and set sail. Ciao Napoli!
Buongiorno Capri! 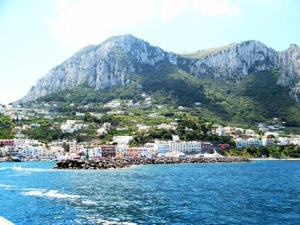 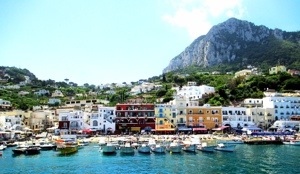 Finally, to meet Franco. I exited the ferry, walked the pier, my new red Samsonite (“Red-a…like the Ferarri” my helpful salesman added) gliding along the cobblestones as if it were remote control. I found the Farmacia, found the Fontana. People watched for just a bit…..quite the spectrum here in Capri.

Comfort?
And then up drives my Franco looking just like Franco. Picture an Italian, bit shorter wizard in the original Wizard of Oz. He hops out of his jeep kinda van thing, strolls over and says, “Ah Paige, you are nothing but beautiful.” Not exactly sure what that means, but ok….
He takes my Ferarri, tells me to sit where ever I want and declares, “Andiamo!”
As we drive from the port to Anacapri, Franco fills me in on my bella surroundings. At one point, he hits my leg and says, “I still-a have cherries-a for you to pick”….like I have been neglect.

The “streets” here are crazy skinny, but Franco pulls over for a couple of seconds for me to snap this.
Seriously, the streets are like skinny sidewalks! Buses, motorcycles, jeep/van things, Vespas, pedi, all share. I swear we had to suck in several times to slip past a bus(ish) and a wall. All the way, Franco is pointing out sights.

A copy of Lourdes. 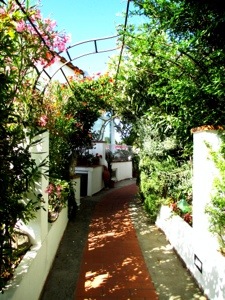 Franco tells me that because I was the first guest to secure for 2013, he has saved me the best-a room. “It is fantastico I tell-a you!” Meet the “Olive”.

As we stand on my terrace, Franco points out the islands, the towns and Vesuvio in the Bay of Napoli. He tells me, “If-a you open-a your arms-a, you have the Bay of Napoli in them-a”. (He is good!)
He then turns to take me in to see my room.

To drive the point home, he takes me to the mirror for my “surprise” of this room he has chosen. He tells me that when I look in the mirror of this room, I see myself in the Bay of Napoli!

At this point, I tell Franco I am hungry and he says there will be a car for me in 10 minutes. When the car arrives, a young guy pops out and says, “Mama Giovanna?”…uhhmmmm sure. 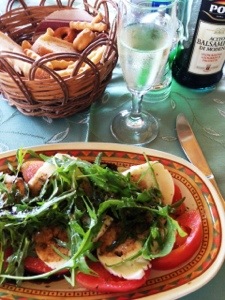 After my first meal in Capri, the driver picked me up, and asked me if I wanted to be dropped off at my room or in Anacapri. I wanted my room to rest a bit, but couldn’t pass up getting my bearings. The only issue was, with these tiny, winding streets, I had no clue how to navigate back to the guest house. I kinda tried to explain that and he said, “va bene…it-a is-a very easy-a.” and dropped me off in Anacapri. 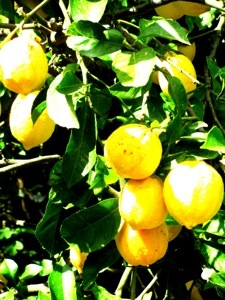 I roamed around a bit, feeling ragged from my day’s journey. I thought if I could make it back, shower, get redressed, I would tackle finding Anacapri on my own. I had picked this cherry earlier. and had been hanging onto it.

When I sat down to take its portrait, I forgot to pick it back up again. I realized this when I was back at the room getting cleaned up.
Feeling a bit refreshed, but still a bit tired and NOT a bit hungry. I began walking back into “town”. This time I made myself a little picture map on my phone, taking photos of where I was turning or weaving right and left, nothing exciting, just land marks. At one point, the surroundings started to look a bit familiar…I got a smile on my face, turned a corner and

There was my cherry!
I bought a bottle of wine and some waters, made my way back without needing my photos, sat down to “talk” with you,

Watched the sunset (Franco had told me earlier that the “Colors will crazy you!”).

And called it a night.

1 thought on “Parte Due Parte Due”