As I was approaching the bus stop to take me into Assisi proper, the bus to the stazione was just pulling off. When I arrived at the stazione yesterday, I glanced at the departures for Firenze and noticed there were several. At the time, I thought the one at 9:30 would be a bit early, but as it was around nine when I arrived at the bus stop, I thought it was possible. I waited for quite a while on my own, a little while later a woman, then a man…of course they knew each other and began solving the world’s problems. I did not want to interrupt, but after one bus passed, I thought I had better verify (hhhmmmm….”verify” makes it sound like there was an initial understanding….the understanding was that there was a ” fermata dell’autobus” sign and I was standing under it) that a bus eventually could get me to the stazione. The taxis that continued to pass (slowly…looking at me) were starting to be a consideration.
So I asked…”autobus per la stazione?”…..stares…..wait……ah ha moment…..”stazione? aaahhhh Si si” and the guy gives me tilt of the head like, latch onto me…. So, when he gets on, I get on.

When we arrived at the stazione, it was 9:26. I look at the posting and it indicates platform 3. Into the tunnel, punch ticket, up to the track….there are only about 5 of us there and when a train pulls up at 9:29 at track 1….everyone runs back into the tunnel…..quick decision time……
So I too run back into the tunnel (so thankful the ferrari is back in Firenze)…before I board, I ask, “Firenze?” Si, si , si…
As we pull away, I think “please give me a town that looks familiar…please give me a town that looks familiar…” then we pass the sunflower field….that I know, so I sit back and relax.

Side Note: Punching your ticket in Italia-
Each time you purchase a card ticket, before you board, you must punch it in one of the little machines mounted in various places in the staziones and platforms. I had read that if you do not you risk being fined. During my first long trip, I only boarded with a computer print out of my itinerary…. no card ticket. Two of the attendants that day told me, nicely, that during the next trip, I needed to use the PNR# and print my tickets out. So I did all my tickets in Monterosso and did as I was told.
In one city, I do not remember where, I actually got off the train leaving my bags…..I KNOW I KNOW….and ran to punch because I had forgotten…I told a young American couple, “I am about to do something stupid. I am going to leave my bags right here while I RUN to that little machine over there and validate my ticket. Will you please watch my bags.”
“Validate ticket?” was there only reply….and the husband followed me… Livin’ on the edge in Italia!
Anyway, yesterday, on the way to Assisi (aahhh…Azizi you-a mean-a) the attendant came around to check tickets, there was an Asian couple behind me and I overheard them say, “but nobody tell us” this was repeated several times while the attendant was writing them a ticket to pay a fine. The guy asked “What happen if I not pay?” and the price went up….to that the guy replied, “Stupid!”……I am slouching in my seat now, afraid to turn around….I hear the attendant say, “Io stupido? sei uno stupido!!”
And the tourist paid…..
Moral of the story….do not get over confident that it is not going to happen….it depends on the attendant and their mood…..

You know how I have fussed about luggage, and how I tried to pack wisely? I glance over at two Poor Clares/nuns/sisters, I am struck by the amount of luggage they have. Each has a suitcase a tad bit smaller than mine (just a tad….and maybe the same size, it’s just that the Ferrari has such a commanding presence) and then 2 stuffed grocery bags each….I figure if I have pared down my worldly goods to a similar amount as a nun…. I am doing pretty good.

I get a bit nervous when at the next stop a guy enters wearing a t-shirt that declares “Jesus died for HIS sins NOT MINE” Why…..why here?

Then, here comes the attendant…..hold your breath….hhhmmmm….he’s telling person after person that they need to move…..looks at my ticket…ahhhh, primo classe…I get to stay put.

During the rest of the trip, I glance back at my books (via ipad) and notes on Firenze. I make a list on what I still need to accomplish in the next day and a half…..I am pretty sure I will not regret leaving Assisi early.

I had better hit the ground running.

I quickly go to the B (such a great location to the train station), ditch my overnight bag and hit the via.
Again, I am hungry, so I head to Pugi to try their schiacciata. Supposedly schiacciata is like focaccia only maybe saltier, crunchier and oilier…..again, TRIFECTA!
I make my way over to Piazza San Marco….easy enough… sinistra, destra, sinistra, destra…

chiuso….LOTS of places are chiuso on domenica….good for them. Not a problem….I have a back up plan. So I walk, stand in the shade, check my map…repeat….repeat…this 2nd place is over by the Accademia .

Chiuso!!
I’m getting kinda weak and delirious now…remember I did not eat last night either. My last meal was the insalata de osteria…
I toy with the idea of just walking in a place….but I cannot make myself….the places that are open look so touristy….so I keep going…not sure where to head….and then, like a mirage, I see a crowd of people in the street….a line leading into a teeniney panino place….is it just that these people are hungry like me? Hungry and desperate? Doubtful…the places around that are open are empty…it is obvious that these people know something that I do not…so I get in line. As I assume my position at the end, a guy comes out of a door across the street carrying slabs of cibatta/focaccia/schiacciata (for all I know) 4 loaves high….I decide I’m going where he came from. Come to find out, it is all part of the same place, it is just that one side has the ovens (and air conditioning). So I assume my position at the end there.

This is what I am greeted with. I apologize that my photos in here are not very good…it is elbow to elbow people, a counter strewn with meats, cheeses, spreads, bread stacked up right under our noses and these hard and fast working people behind the counter. 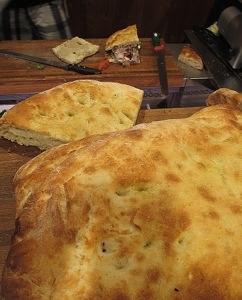 I start to get nervous….I don’t know what to order, there is no menu, I cannot get a bird’seye view to know my options, I don’t want to make anyone mad…..what to do? Then it is my turn, “vi! Vi!”. I have heard this enough to know it means some sort of “go”. So….I just point at everything and say. “You choose.” Without missing a beat, the young guy grabs a new loaf, warm and dripping with oil, cuts a 5×5 piece, slathers a couple of spreads on it (one was artichoke, one not sure) pompodoro, Prosciutto Toscana, mozzarella, and honestly I neither know nor care what else….he wraps it in a paper and says, “for you momma”. I add a glass of wine and it is 7 euro!! Not the wine, the whole meal. I elbow my way to part of a seat along the wall, directly behind the line and just sit and admire for a moment.

I am once again, so darn happy. So happy that I did not succumb to my hunger…I once again stuck with my vision. I use to think some of the sandwiches we have gotten, freshly made at Central Market were good. And ya know, they were good, but this…this was amazing. 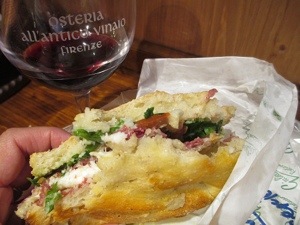 I actually think I napped somewhere during the middle, but I awoke to finish…. 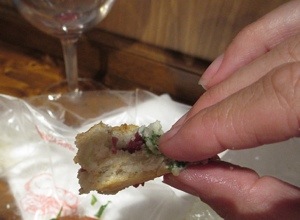 No wait….I lost some in the process…. 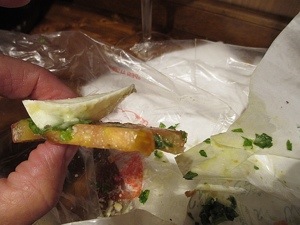 I think a little prayer of thanks goes to Santo Lorenzo.

On the way out, I snapped a few more “action ” photos. 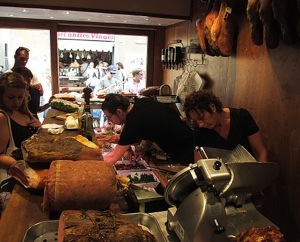 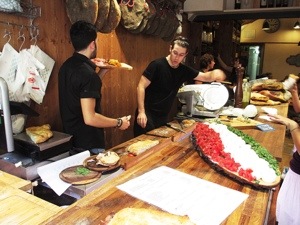 I walk outside to see a line still forming both here and across the street. 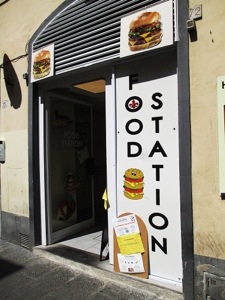 Listen to the masses!

Before I start to roam, I take a quasi bath…

Feeling full and refreshed…I am off.
For a while, I roam from street sign to street sign…more on that in a dedicated post.

I later find myself again near the Accademia and Uffizi. In the courtyard between the galleries you will find artist after artist. This guy caught my eye. His caricatures remind me of ones done by Monet when he was younger. 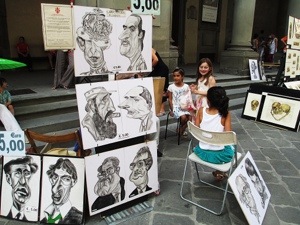 I watch him for a bit.

I decide for 5 euros and 5 minutes…perché no?

I wait in line along with 3 young girls, I think he assumes they are with me and when I sit, he has them sit in front of me to keep my attention in one place. Here is what entertained me while he worked. 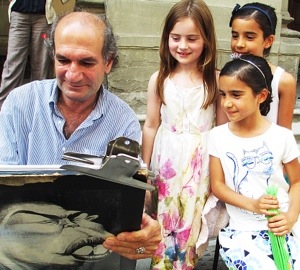 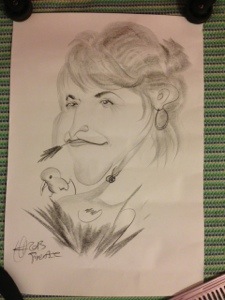 Drawing something coming from the mouth must be a signature of sorts. The family in front of me all had flowers coming out of theirs. I am assuming the chick means I am not spring chicken….not sure about that symbol, but he says he draws the body as he wants….at least he added my necklaces. But 5 euro to have your “portrait” drawn at the Uffizi….perché no!
And then it was their turn…

On my way past other artists, one creating some assemblage/collage work caught my eye. Although he did not allow photos of the front, I asked if I could take a photo of his name. 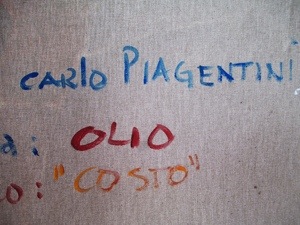 I can’t pass up seeing what the street artists are creating each day.

Those are the two artists back there on the curb chatting it up. It is so funny, they do not “work” the crowd…they just create…

I took a close-up of this wing to illustrate to my students (and myself) that “white” is not white. 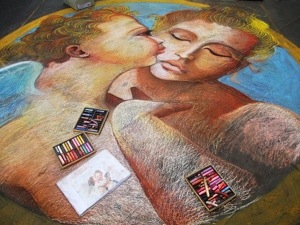 I decide to check one more thing off my list before heading back to the B. 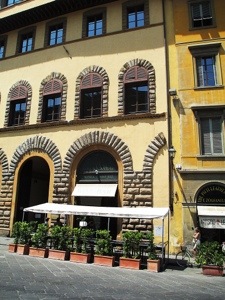 Wine Tasting
This place has been mention by several people as where to come to get a fabulous range of vino by the glass.

It is something I forget to write about, but I love the choice of old music played in many of the establishments. Old, classic American and Italian music..20s, 30s, 40s, it just sets the right mood. There was a restaurant in Anacapri that every time I would turn the corner coming into the piazza, it would make me smile. 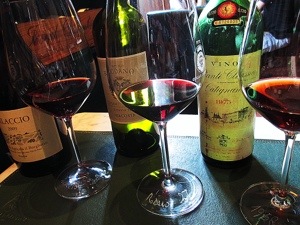 I chose to taste a trio flight of local Chianti. And boy, was I a disappointment to my sommelier.
He chose for me a 2009, a 2007 and a 1968 (although the bottle says 1975).
I swear I thought this was some kind of a test….that because he had touted the 68….it was a trap. I did not like it at all…I kept trying it…not liking it….trying it….making a face….so I just left it and finished the others. When he came by and notice the 68 still there….he picked it up, stuck his nose in it, breathed deeply, made a sound reserved for intimate moments…shook his head at me, and said something in Italian followed by “I will get you something else.”
It was no doubt the oldest and most expensive wine I have ever had, ma non era per me.