Buongiorno! Today’s post will be breve e dolce. Due reasons, uno- my morning was spent working out and due- my afternoon was spent in the Uffizi Gallery, where photos are not allowed.. 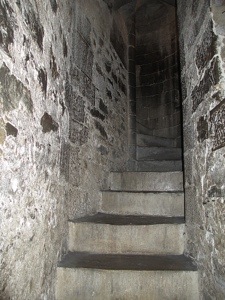 So I did just that. I arrived earlyish to the square finding crowds already gathering. Fortunately for me, not many were in the line yet to climb the dome. The morning was warm and humid with the moisture still hanging in the air from yesterday’s rain. This should make for fine climbing conditions right…..actually, not so much…the humidity in those tee-niney corridors was quite heavy.
As I mentioned, knowing a bit about the dome, I “knew” what I was in for. It was quite the contrary for most of the others in line. Some actually didn’t even know what they were in line for. And as we entered and began our climb, you could hear comments like, “seriously?”, “Is this some kind of a joke?” “Are we there yet” and I kid you not that was in the first 10 minutes.
If you thought about where you were and the conditions too much, it could over come you. If anyone has ANY tendencies to claustrophobia…I suggest you rethink this.

I also suggest you not think too much of being trapped forever with the people in front or in back of you…especially if you are with 2 “MindCraft” (Don’t even know what that is but I think it is a video game) crazy guys. Luckily the only thing I understand in Korean is “MindCraft”.
Once you REALLY need a break, you enter the interior of the dome. This is a bit of a relief, but you are in kind of a plexiglass, smudged tunnel….the view is not that great. 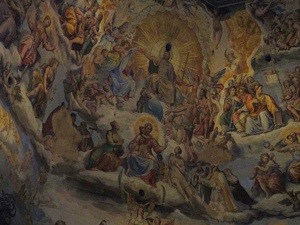 You are also still in very close quarters and so not to incite some sort of hysteria, ya kinda push on.
And so we continue our climb. 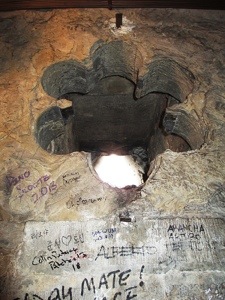 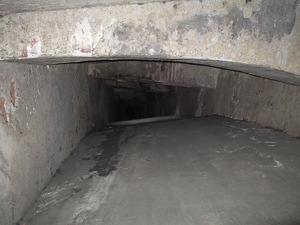 Here you can actually see and touch the engineering genius of the 2 domes to create one.

And finally, we reach the top. The view across to Giotto’s campanile.
With the air still heavy, I am not sure whether our view was better than a clear day or not. I am learning that the clear, sunny days can impact your views in a negative way…it can just be too bright.
It continues to boggle my mind how structures like this one were conceived and executed and in the 1400’s no less. 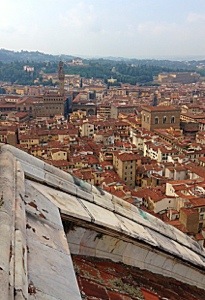 At the top, it was still quite crowded. People hesitated to start their descent fearing more of what they had encountered on the way up. I even chose to take 2 laps around the (small) top to breathe in as much fresh air as I could. And except for the two fussing teenagers, down was a breeze (figuratively).

So when I exited, I found the first place to buy a bottle of water and thought about what the best thing to do next was….climb more right! So I decided to tackle the Giotto’s campanile as well. I will tell you, this is easier, but with less payoff….così è la vita. 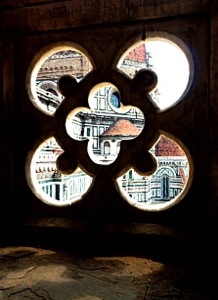 A view of the Duomo through the campanile.

I am taking a little iphone photo class during the month of July. Basically they just give you a challenge a day, and tell you about some apps. Today’s challenge was “Change Your Perspective”.

From the Duomo of the Campanile 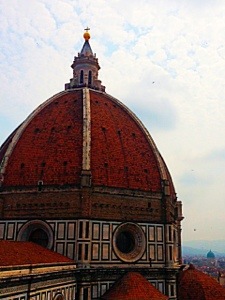 From the Campanile to the Duomo…

Although at this point, my clothes were hanging off of me, I decided to wait to clean up and head to Trattoria Mario, a place I had tried before but it had already closed.
This time when I arrived, they had not yet opened their doors, so I (along with others) waited.
About 15 before noon, a guy came out and invited us to wait inside until they began serving…already a good sign.

This is taken from the inside, but you can see, they get A LOT of press…good press. 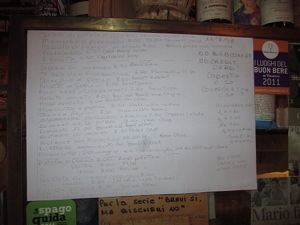 A couple of things you need to know…the “menu” is handwritten and posted daily(do not expect to get one at your table) and you will be sharing a table (tiny) with others.
So I am sitting there waiting and all of the sudden this tall, young guy (20’s) is sitting next to me, reading. “Buongiorno.” he says. Then there is an old man that sits down. “Ciao Roberto!” says the young guy. “Ciao Lucca.” greets Roberto.
All around me, tourist are sitting with other tourist….but LUCKY me, I get due Florentines!!! Well, Roberto is not actually a Florentine. He is from New York but has liven in Firenze for 18 years. Anyway! Am I lucky or what!!??
Lucca speaks a “little” english so I asked him what I should order. He says, “May I madame?” and he begins to order from Fabio, his football buddy/waiter, for me. Again, AM I LUCKY or WHAT!?!
He ordered me several meta (1/2) dishes AND insisted I try his. 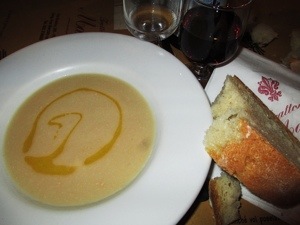 Tortelli stuffed with potatoes and cheese
And of course Chianti.
When Lucca was served his roast beef and fried potatoes, he held his plate to me and said, “Madame, please.” Those potatoes were so good…dusted with salt.

Here’s our first try where Lucca is trying to avoid the camera guy from getting hit by the door. 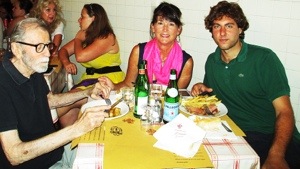 And here’s our 2nd try where Roberto decided to nap…
I cannot tell you how much I enjoyed this experience; the food, the conversation. Roberto was a middle school math teacher in New York. He’s been to Texas once but only at the airport.
Lucca is a Political Science major at a University in Rome. His specialization is Football Management. His dream would be to work for CS Firenze. Anything that I would try to say in Italian, they were very kind and encouraging.
After Roberto finished his meta Panzanella, he bid us goodbye. When it was my turn to leave, Lucca was already up and behind the counter someplace. I asked the guy at the register if I could please pay for Lucca’s lunch for him being so kind. All of the sudden, Lucca pops back up and says, “Absolutely NOT Madame. I was just coming to bring you a toast of Prosecco.” Pop goes the cork….(bummer, I just remembered, that one I forgot to grab), “Chin-Chin! See you tomorrow Madame.” Happily I paid my 9 euro bill and was on my merry way.

After I cleaned up, I was off to my 3rd tour with Florencetown Tours. The skies were starting to darken and rumblings could be heard. I thought it was fortunate I was headed indoors.

The Uffiz/Vasari Corridor Tour went well. Mario was our guide and he seemed knowledgeable about the art and conveyed a certain passion. Our main emphasis was looking at pieces from Medieval Period to the Renaissance. He also highlighted, of course, Florentine artist. I learned a lot that I can take back to my students. My favorite pieces were; Simone Martini’s Annunciation (the rendering of the Holy Spirit is beautiful), Lippi’s Coronation of the Virgin and Michelangelo’s Tondo Doni. I remember that “the round one” was Jim’s favorite on our visit years ago.

Included with this tour was an “exclusive” visit to the Vasari Corridor, you remember me mentioning it the other day. It was interesting to go from the massive crowd at the Uffizi, through a door and into a long corridor with only 8 other people. 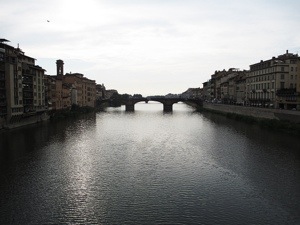 This photo was taken at the exact spot where Hitler and Mussolini stood during Hitler’s visit to Florence. The once small, windows were removed and large ones were installed so Hitler could have a panorama of the city. Supposedly, that impact is what saved the bridge from being bombed during WWII.

As I left my tour, exiting at the Pitti Palace, I roamed the streets once more, heading in the basic direction of my B. At one point I heard the sound of music being played; guitars, tambourines, hand drums. Then the voices joined in. My path merged with the path of about 20 young adults led by two Franciscan Friars. They were walking, playing and singing the most beautiful song. I was so moved. I just began following them wanting the song and feeling to continue. I videoed a bit of it and would so love to know what the song was they were singing. 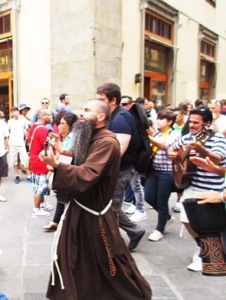 They had no signs, no pamphlets, no flags. Their message was being conveyed through song. Although I could not understand the words, I received His message.
I followed their voices for blocks. At one point I approached the friar with the guitar and asked him if he spoke english. He said no but we did what we could to communicate. He basically said they were from Rome, a catholic youth group. After I shared, he looked at me and said he would pray for me. Of all the churches I have entered, all the candles I have lit, the mass I attended, this was the most moving, spiritual moment of my trip.

When the rain began yesterday, the though of those beautiful pastel pieces on the street being reduced to colorful puddles made me return. This is obviously a spot artist trade off working at.
Today’s pieces- 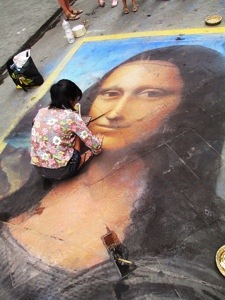 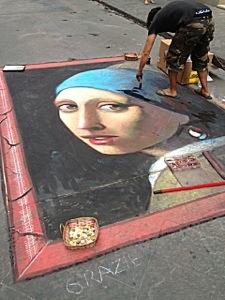 Can you imagine all that effort knowing it will be for a few hours at most?

I returned to Trattoria Katti for dinner. It was fun to be remembered. Katti, the owner’s daughter is a young, gorgeous, hard working girl. She asked me since it was cooler tonight, did I want what I had considered the other night? I said yes, and she filled in the rest for me. 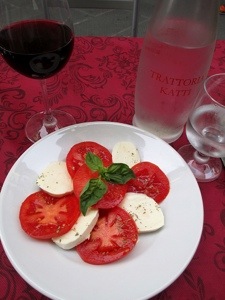